From the Mini documentary in Browning, MT

What People are saying about Distant Thunder 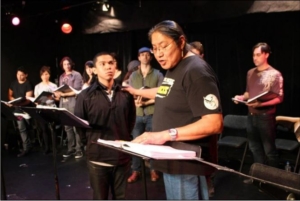 It (Distant Thunder) was extremely moving, the performances were incredible, the Native cast was amazing! An incredible story…that happens not just on the Blackfeet Reservation, but everywhere in Indian Country.

I was introduced to “Distant Thunder” written by Lynne and Shaun Taylor-Corbett by our mutual publicist, Joe Trentacosta.  I immediately understood the importance of getting their work produced in this country now since it could have a huge impact on what it is to be a Native American in contemporary America. The commitment to preserve language and continue traditions while stepping into the future is more difficult when most Native American feel ignored and cast aside.  This is an enormous challenge of which most Americans are totally unaware.

I am of mixed heritage and have long been an advocate for Native causes.  As a result of having portrayed diverse Native characters in film and television, I have been adopted into both the Cheyanne and Lakota tribes and was honored by naming ceremonies in their respective tongues.  It would give me great pride to see “Distant Thunder” produced, a contemporary Native story brought to life on stages across the country.

I am often hesitant to respond to casting calls but felt this one was something special. It’s the story of a warrior going home.

Playbill.com
“Distant Thunder” is a wonderful and important opportunity to explore some of the consequences today of the near eradication of Native American nations and cultures . . . “

Preserving the Blackfoot language is the driving force of the play which shows that, when an indigenous language dies, the culture dies . . . ‘Distant Thunder’ is a colorful story with great humor; they did their homework and got all the characters right.